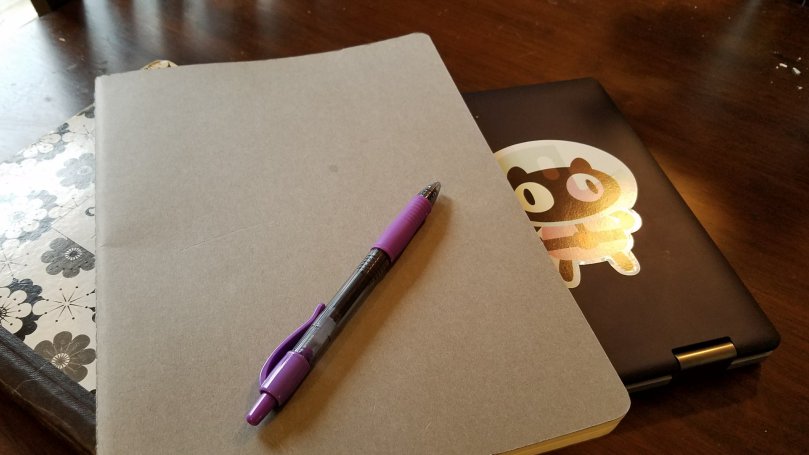 I have a hard time letting things go.

I get attached to things where I made a start. My worn out Monchhichi I’ve had since a baby still sits on my shelf. Moving out of the condo my husband and I lived it depressed me, even though we’d outgrown it (before miss baby even came along).

Stories are hard to let go of, too.

I tried to rewrite the novel I began in college, the novel I worked on as an independent study with one of my favorite professors. That didn’t work. Then, I tried to go back to the middle grade story I’ve held in my heart for years, the one I NANO’d and learned how to edit on through two years of grad school, the one that gave one of my best writing friends the idea, before we’d ever met, that I might be someone she’d want to spend our limited residency time with. Every character is a piece of my heart, and I want–need–their story to work.

Even through the rewrites and imaginings, the fun of getting back into their heads, and even with the progress I’ve been making, I can’t make the story feel alive for me. Working on the story is feeling like a chore, something I’m obligated to do, rather than something that calls to me.

Maybe I’m abandoning this thing too early. But then I think back to the last novel I finished that I’m currently querying. Even the hard parts of writing that novel were exciting, and even hours lost retooling a scene that ultimately failed felt good and right. Nothing like what’s been happening with this rewrite.

So for the past few days I’ve moved onto something else…but there’s still the guilt, the thought that I’m doing the wrong things. Then, while reading Making the Perfect Pitch, I came on this bit from agent Donald Maas:

…I’d rather hear that this is a fourth manuscript than this is a first manuscript, because that shows me that there is an author who’s been working on their technique for a period of time.

There are exceptions, but most of the time a first manuscript is not really salable. It’s a couple of manuscripts down the line that people really get the hang of the fiction form…

I’m a couple (or a half dozen, depending on how you look at it) of manuscripts down the line. And I’m finally feeling like I’m getting the hang of it. Maybe I can go back to my other stories someday, but now it might be time for me to move on to see what I can do.

One thought on “Writing Problems :: Letting Go and Moving On”