We go to Walt Disneyworld on Friday — that’s only two more sleeps away! Which means I’ve been packing. My suitcase is most of the way there, stuffed to the brim with enough shirts for a trip three times as long (I like to layer my tank tops…also I really like tank tops) but I have to make sure my carry on for the airplane is all set, too.

My Animal Kingdom Bag. It’s a little small, but I like to use this as a park bag, so I keep it on hand on the airplane. It can fit quite a bit inside of it, and I’ll have our tiny suitcase for things I like to have on the plane that I won’t be using during the flight.

NOOK. Having a Nook has been really handy for trips. I can buy books, load library eBooks, and basically carry a whole library to suit my reading whims while I’m in that metal tube for a few hours.

Paper Book. Of course, technology fails us sometimes, so I like to keep one paper book in case my Nook freezes, or if I need the feel of a “real” book in my hands. Pictured below is a Terry Pratchett novel, but I might bring something else from the library book sale…

Notebook. Gotta have one of those! NaNoWriMo is coming up, and I’ll be behind when I come back, so I want to get as much of the plot hashed out as possible, and I may need to write some of the story by hand.

Water Bottle. This is also more specifically for toting around the parks, but a Hank Green video also gave a good tip about bringing an empty water bottle through TSA and filling it up at a bubbler once you’re in the terminal, so you don’t have to buy expensive bottled water before boarding.

My Personal Pharmacy. Not pictured. But, my husband and I have a history of feeling…ill…on the first day of a trip (traveling, dehydration, lack of sleep…hooray!) so I’ve got my ibuprofen and a whole slew of stomach meds packed away. I’ve also got my sunscreen so I can shield my pasty, pasty skin after we land, and hand sanitizer since other humans are disgusting. 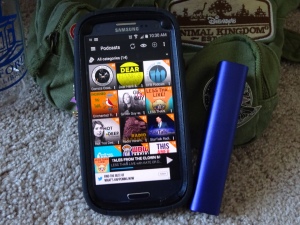 My Phone. Duh. But really, I use this for podcasts, audiobooks, music, games…it’s an entertainment necessity.

Portable Battery. New addition! On our last trip my phone konked out before the end of each day. While I won’t be using it for pictures this year (yay new camera!) I still want to use the Disney app and creep on Twitter if we’re stuck in a line. Plus that first day, we likely won’t be able to charge our phones after playing podcasts for 3 hours, so we’ll need to keep the phones alive somehow.

So, is this overkill for a flight? What do you stuff in your airplane bag?

2 thoughts on “Airplane Bag (Walt Disneyworld is Trip is Coming!)”