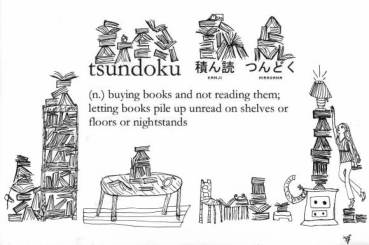 Tsundoku. I ran into this word a while back, on one of the random Facebook pages I follow, and I was shocked. I’ve known what I do for a while, but it’s nice to have a word for my problem. I buy books. I get them new, and used, and comics and novels and things written by teachers and acquaintances. I stack them up on shelves and sometimes the floor, fully intending to read them, but then I…don’t.

I don’t think I always had this problem. I have memories of times in adolescence when I had nothing new to read in the house. But now I’ve begun to collect books faster than I can read them, and it’s getting a little out of hand.

I really noticed this as I began weeding my collection and donating things to the library. I gathered up books that I knew I would never read again, books I had gathered up on a whim from some sale or when I worked at the used book store (such a dangerous job) that I felt no desire to even open, and got those out of the house. Then I encountered these books: books that I acquired weeks, months, years ago, that I want to read — I really really want to read! — but I never have, and still haven’t.

So, I’m going to work on it. Obviously I’m still going to take books from the library, because I work there and I’m a chronic hoarder of paper books (though luckily these ones have to leave my house after an allotted time) and also because sometimes (most often) the book you’re in the mood for is just not in your home. And it will be a cold day in hell when I stop buying new books altogether. But I’m trying to alternate between reading something I’ve newly brought into my life with a book that’s been waiting. I’ll probably never catch up completely, but maybe I can close the gap.

As long as I don’t buy too many books…

And I can be trusted to do that…

5 thoughts on “Battling Tsundoku; or, Get Off My Shelf!”