Unlike the last time I did one of these posts with To Kill a Mockingbird, I don’t think I somehow missed this book in high school, since schools are usually busy making you read The Catcher in the Rye to worry about Salinger’s short stories. (By the way, I remember liking Catcher, but I don’t think I totally grasped it in NINTH GRADE.) But anyway, I feel like I should have been made to read this book in college, or at least had it suggested to me at some point while an undergrad.

I remember someone at Lesley, either a student or a teacher in a seminar, using a portion of Franny and Zooey as an example. And then lately, I’ve seen a few things talking about Catcher, and Salinger, and that gave me a desire to pick up this book and finally give it a look. I never found it the few times I got into a used bookstore (they always had copies of Catcher in the Rye, though) but then just last week, as I was shelving books in the library, there it was, the only Salinger book on the shelf. So I grabbed it. 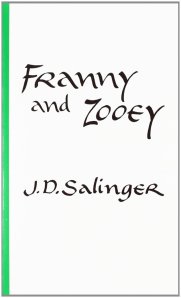 For those as ignorant as I was, Franny and Zooey is a collection of a short story (“Franny”) and a novella (“Zooey”), and while they are technically separate they both take place in the same fictional universe, follow each other chronologically, and feature the character Franny Glass. In the first story, Franny, a college student has been reading a religious book, The Way of the Pilgrim, which focuses on learning to say the Jesus prayer, and become overwhelmed by the phoniness and selfishness of the people around her, including her boyfriend Lane (who is really an arrogant, self-important tool). Franny’s whole disenchantment with the world, and, as she admonishes herself in “Zooey”, she keeps “picking” at everything Lane says.  But really, as far as I see it, what has happened is that Franny has had a revelation about her world, is trying to figure out what to do with it, and wants someone to listen to her and understand her. But Lane, being so self-involved, only takes offense to Franny’s behavior, and throughout their lunch Franny continues to fall apart. “Zooey” continues this story, though through the eyes her her youngest older brother, Zooey, who keeps trying to talk to Franny about this, but, because of the way he is, only makes it worse each time.

What I loved about these stories, particularly “Franny”, was how the action, and the story, all take place through conversation. “Franny” is mainly one long conversation between her and Lane. “Zooey” is a little less of a percentage of that, with time being dedicated to describing the Glass family, and also some of the rooms in the family’s apartment. But still the big parts, the parts I couldn’t stop reading, were the conversations, between Zooey and his infuriatingly, hilariously obtuse mother, and when he talks to Franny, analyzing her actions and motives for breaking down at home and fixating on the Jesus prayer. As a reader, I loved it because a story that focuses on characters, focusing on how they change, grow, and reach their epiphanies by the end of the story, is almost always my favorite form of entertainment. And as a writer, who sometimes crams a lot of conversation into her stories, these are a great example of how two people talking can still carry a lot of anxiety, dram and weight.

Maybe I wouldn’t have liked this as much in college as I think I would have (though sophomore year is when I was given, and fell in love with, Pride & Prejudice, an older, more-difficult-to-read novel revolving around conversations and misunderstandings). After all, I’m not sure I would have been able to fully understand Franny’s disenchantment. But in any case, I’m glad I found it now, when I’m able to realize exactly what I can learn from it.

One thought on “Catching Up: Franny and Zooey by J.D. Salinger”