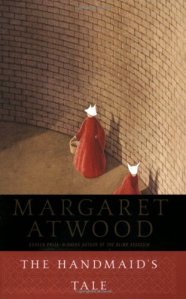 My reading focus was on The Handmaid’s Tale

by Margaret Atwood. A dystopian novel (not science fiction, though), The Handmaid’s Tale the the chronicle of one woman who we only know as Offred in the new country of Gilead, which exists in at least part of the United States. With the birth rate having dropped, certain women – because of their proven fertility – are designated as Handmaids, each given to a Commander so he can impregnate her and he and his Wife can raise the baby. The story often flashes back to the “before time” when Offred remembers her mother, her friend Moira, and her husband and their child, so that we can see how this new country came to be, and how women gradually lost all of their rights, for the greater good. Because of this the novel isn’t linear, but I never felt like I lost my place in time; I was always able to place the event the narrator is talking about in the correct time. It’s a very good, very well-written book, and I found myself unable to stop thinking about it, even as I was going to sleep. Still, the themes, and the possibilities, make me very uncomfortable, and I don’t think I’ll ever return to this one. 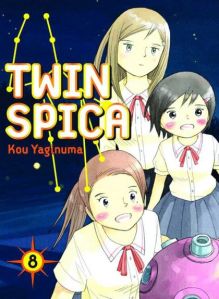 I’ve also been poking away at some manga, most notably (for me) being the latest volume of Twin Spica

. I think I’ve brought this manga up before. It takes place in the near future, with the main character, Asumi, taking part in the astronaut program at a high school. Even though her mother died in a fatal accident when the Lion rocket crashed in her home town, traveling to the stars has always been her dream. Even though she’s very small, she’s so determined and pure-hearted you just have to believe that she’ll eventually make it. The story is also about the friendships Asumi makes with other students, and how they all push towards this same dream. But the manga is also bittersweet, as this volume focuses on how in pursuit of these dreams the friends may move apart, and some may even be left behind. I love this manga, I think it’s my current favorite. I hope to do a proper review of the series someday.

This week I’ll start in The Wee Free Men

and possibly the next Book Girl and the Famished Spirit

by Sharon Creech, such a short book that I should have no trouble finishing that.

2 thoughts on “What I’m Reading: The Handmaid’s Tale, Twin Spica”

Fitting That Stuff In

There was an error retrieving images from Instagram. An attempt will be remade in a few minutes.