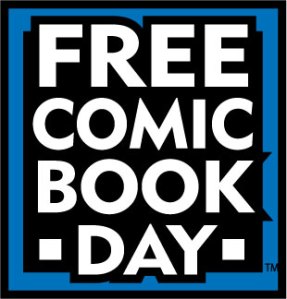 Saturday was Free Comic Book Day, and there was a huge number of books to pick from. So what did I grab for myself? Children’s comics! Because evidently I’m twelve.

Here are the free comics I took:

I still haven’t gotten through the last two comics on the list, but I’ve enjoyed the others that I’ve read so far. Chip n’ Dale/Darkwing Duck was like a trip back to my childhood, being shows I used to watch on Disney Afternoon. The Chip ‘N Dale Rescue Rangers

comic was amusing, but I probably won’t look into the collection; Darkwing Duck

caught my interest, though, as it delves into the story of an older super hero taking up the cape again.

was a preview of a collection of old Disney comics that will be coming out soon. These comics are from the thirties, and it’s surprising how amusing these comics still are (and also interesting to see how big of an asshole everyone in the Mickey universe is!).

I refrained from reading the Star Wars portion of Dark Horse’s comic (because I don’t care) but I went right into the Avatar storyline. These were a couple short chapters from an upcoming collection, The Lost Adventures

, which if I’m remembering right are comics from Nickelodeon Magazine. I’m such a nerd for this cartoon, I know I’ll be grabbing that when it comes out.

Rated Free for Everyone! is a preview of two children’s comics from Oni Press. Sketch Monsters is the tale of a girl who expresses herself through art, which sometimes comes to life and wrecks havoc on the town. Power Lunch is about a boy who is told he’s allergic to practically everything, but in reality different foods give him a variety of super powers. Both were cute, but Power Lunch had such an interesting concept that it’s more likely I’ll pick that one up when the book comes out.

Did any of you go to Free Comic Book Day? If so, what did you get?

8 thoughts on “Free Comic Book Day – What I Picked”

Fitting That Stuff In

There was an error retrieving images from Instagram. An attempt will be remade in a few minutes.