This week I got into two middle-grade novels, both suggested by Anita Silvey on her website, Children’s Book-A-Day Almanac. 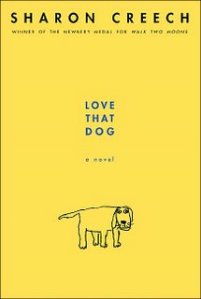 The first I read was Love That Dog

by Sharon Creech. From the point of view of a boy named Jack, this book is a love letter to poetry as Jack learns to write poems in Miss Stretchberry’s class. The book is written entirely in free verse, and at 86 pages it took me under an hour to read. One of the things I found absolutely delightful was the references to poems I love:

I don’t understand
the poem about
the red wheelbarrow
and the white chickens
and why so much
depends upon
them.

Maybe the wheelbarrow poet
was just
making a picture
with words
and
someone else–
like maybe his teacher–
typed it up
and then people thought
it was a poem
because
it looked like one
typed up like that.

But Love That Dog doesn’t just focus on poetry; true to it’s title, it’s also a book about a boy who loved his dog. Early on we know that something bad had happened, as Jack writes “Yes, I used to have a pet. / I don’t want to write about it.” But, it’s actually a happy memory that almost had me crying straight away, when Jack and his dad get his dog Sky from the animal shelter:

Love That Dog was a fantastic read, and quick enough that you can finish it before having to leave the library. But if you love animals, please listen and bring a box of tissues. I’m keeping my eye out for the sequel, Hate That Cat 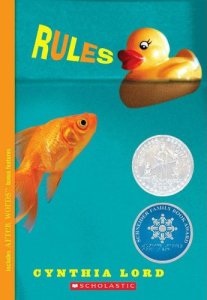 Another touching story was Rules by Cynthia Lord. This book followed Catherine, a twelve-year-old girl with an autistic little brother. Even without having dealt with a disabled sibling, I understood the character’s need to be normal, to not have people think things when they looked at her; to find acceptance and not have people realize how strange and different she really is. Rules also reminded me why I still love children’s literature: because actually, things don’t really change. Like when she’s trying to have a conversation with her new friend Kristi, and feels she can’t stop talking: “Soon as I say it, I wish I could stuff the words back into my mouth…Oh shut up, I tell my tongue.” I still don’t seem to have any control over how much I blather on, so I felt her pain.

This week I’ll start reading One True Thing by Anna Quindlen for my MFA, and continue to pick away at A Game of Thrones. Maybe I’ll even start to chip away at the stack of books I already have.

What have you read? And what’s in your pile?